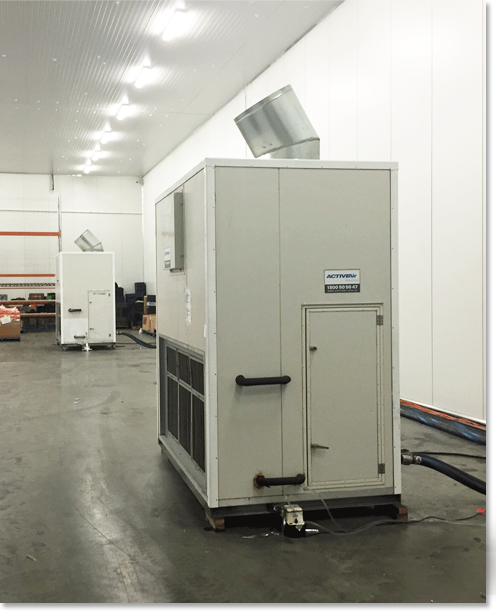 Since starting their first milk round in 2005, Aussie Farmers Direct has become an industry leader in online food shopping. Aussie Farmers Direct have a very simple yet complicated objective: to source the best local milk, eggs, cheese, bread, and juice they can find and offer it as a home delivery service to the community.They wanted to reinvent what the old fashioned milkman stood for, but this time, add modern technology to make the service easier. They also wanted to create a sustainable business that developed farmer friendships, rural support initiatives and promotion of healthy fundraising.So unsurprisingly they found great success and eight years on with a milk factory, five distribution centres, over 200 milkos and approximately 130,000 customers, Aussie Farmers Direct had outgrown their NSW facility.  A new purpose-built facility was nearly set to go, but like all the best-laid plans, things didn’t go quite as expected.

‘We had no choice but to vacate our old premises.’ Explains David Anderson, Distribution Centre Manager NSW, Aussie Farmers Direct. ‘But there was a two-week delay on the permanent refrigeration equipment.’

Their inventory had to be cold stored. However, with no option to reschedule their shift and no permanent refrigeration equipment they faced the daunting prospect of losing their very sizable inventory of meat and produce. To make matters worse, it was the start of summer and the lead up to Christmas.

David was responsible for coming up with a solution:

‘I found three companies who I thought could help us. Two of the companies told me flat out that it couldn’t be done; that temporary air conditioning of our two 1200m2 cold storage facilities was impossible. Then I called Active Air Rentals.’

Brad Sweeny, Director, Active Air Rentals explains. ‘We got a phone call from David and after an initial discussion we did a site visit. Once we knew the site specifics we worked with our engineers and came up with a solution.’

Low Temp Chillers Were A Must

‘Firstly, because the air had to be so cool, 7°C and 3°C respectively, we chose to use low temperature chillers with glycol. Due to the critical nature of the job we added in specially insulated buffer tanks to ensure a consistent low temperature water supply.’

‘Secondly, we needed to ensure even cooling throughout the facilities with no hot spots. We achieved this with huge airflow generated by multiple air handlers placed strategically throughout the sites.’

‘With no power on site we also needed to supply generators to run the chillers and air handlers. These ran 24/7.

Additionally, because it was ‘mission critical’ that the facilities stayed cool, we added 100% redundancy on all equipment.’

‘The most taxing part of the job was that our team had only four days in which to get the cooling solution installed. The Active Air team worked from 6am to 11pm every day to get it operational.’ Explains Brad.

Once the install was complete the two companies worked in close collaboration to ensure everything went to plan. An Active Air technician also completed daily site checks to ensure smooth operations.

The temporary refrigeration solution worked as expected.  David and the Aussie Farmers Direct team were very happy to have avoided stock loss and ensure business continuity.  David sums it up,

‘The Active Air Rentals team did a great job. They were quick to respond, their customer service was great and they helped us through a difficult time.’