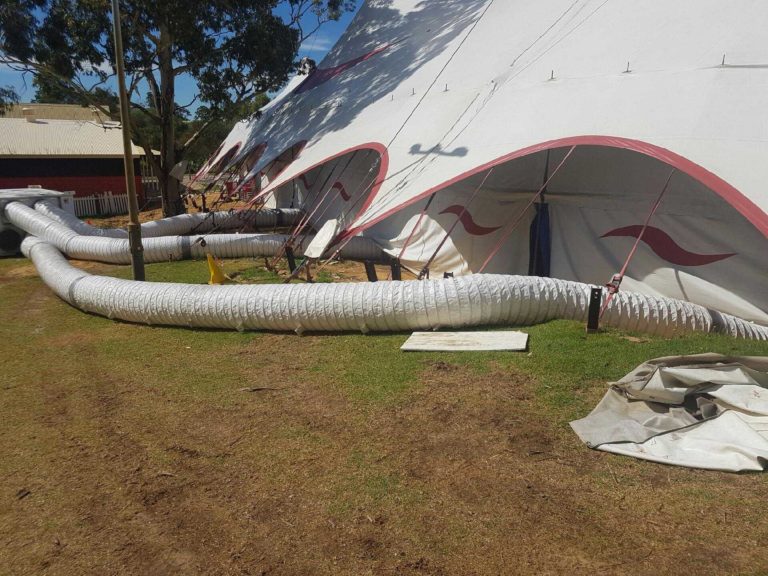 Cirque Extreme! Is a thrilling, adrenaline-fueled show that will run for 6 weeks in the Ashton Circus big top tent at the base of Kraken at Adventure World.

In the past shows had only been held in the evenings during summer, when it was a bit cooler, but this year they wanted to try something different and hold two 30 minute shows per day at in the hottest part of the day at 2pm and 4pm. This would make the shows accessible to younger audiences whom are usually tucked away in bed during the evening shows.

Climate controlling the b ig top would mean that an extra 1200 people could attend the shows daily. Joseph Ashton from Cirque Extreme! Approached Active Air Rentals to provide the climate control solution.

The Challenge and Solution

Active Air loves a challenge and cooling the big top certainly provided us with that.

These performances are being held within the grounds of “Adventure World”, Perth’s answer to “Wet ‘n’ Wild” on the Gold Coast and it proved to be quite the logistical nightmare.

The ground that the big top was positioned on had literally been cut out of the side of a hill, leaving no room for equipment or access.

We achieved a successful installation by using all wheel drive Hiabs, bobcats, 4WD vehicles and working before the park opened to the public. The area had to be left with minimal impact on the people entering the park. All equipment had to be hidden from view where possible.

Even during a day of 40deg+, the climate control solution maintained a consistent and constant cool temperature inside the big top for the performances.

Joseph called our WA State Manager extremely happy with how things are going and will look at climate controlling future events.

The attraction is included in the standard entry ticket for the park, providing another AWesome reason to visit or pick up a Season Pass and enjoy a whole season of AWesomeness.