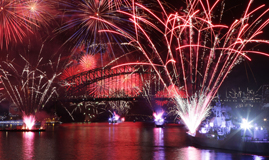 In late 2011, the Chief of Navy – Vice Admiral Ray Griggs, invited over 50 nations to send a warship and/or tall ship to participate in an International Fleet Review (IFR) to be held in Sydney from 3 – 11 October 2013. The Review celebrated 100 years since Australia welcomed their first Naval Fleet into Sydney Harbour.

The week-long celebrations included a pyrotechnics and light show spectacular. Creative agency, Imagination, had the job to celebrate this milestone in a way the city and the world would take notice of. The IFR Spectacular was born and suppliers had to be found. The lighting and projection for this event was organised and managed by lighting and video specialists Chameleon Touring Systems and TDC respectively.

Due to a previous successful event with Chameleon Touring, Active Air Rentals was asked to quote for the pyrotechnics, audio, visual and lighting equipment power supply.

“We’d worked with Active Air before and knew their equipment and people were great.” said Luke Cuthbertson, Project Manager, Chameleon Touring. “It was a very challenging job with specific requirements.”

The power supply had to:

“It was a challenge.” Comments James Quintal, NSW State Manager, Commercial Division for Active Air Rentals. “But that’s our thing, we love a difficult hire.”

Working in close collaboration with Chameleon Touring and TDC the Active Air team worked to understand their needs to the deepest detail.

“We did a lot of site visits in August.” Explains James. “We got a good understanding of what they wanted and then tested our equipment to make sure we could meet the sound and space requirements. Only once we were happy that we could deliver did we quote.“

Active Air proposed 44 prime and back up generators ranging from 6.5kVA – 275kVA, distribution and cabling. Active air was awarded the job.

“They were so responsive to our needs. James and the team were always willing to come up with a solution whenever we presented a challenge.” Said Luke.

Leading up to the event the Active Air team met regularly with Chameleon, TDC and Imagination to ensure requirements and expectations were well understood.

Bump-in occurred over a nine day period at different times of day and at different locations so as to minimise public disturbance.

“It went like a well oiled machine,” commented James, “The Chameleon and TDC teams were very professional and well organised.”

On Saturday October 5th the IFR Spectacular started. Active Air staff were positioned in key locations to ensure all equipment worked as planned.

Fireworks were launched from seven warships, combining with a light show from 28 land and ship locations, a 30 minute projection show, live action on-board ships plus aerial flyovers from the Navy and Air Force. This was all choreographed to a stunning soundtrack. All of which was powered by Active Air Rentals.

It was a late night for the Active Air team; all  warship generators had to be removed by 2am.

“We’re so proud to have been part of this incredible event. Our team rose to the challenge, proposed a great solution and went the extra mile to ensure the event was a success.” Said John Sweeny, Active Air Rentals Director. “The power never failed, there were no noise problems and there were no mechanical issues. It’s another example of our team thinking outside the box and coming up with a great result.”

“James and the team were very professional and accommodating. Nothing was a problem and they went above and beyond what was required. They always had people on site to make sure it all ran smoothly.” Noted Kain Jones, Special Project Manager, TDC.

“Everything the Active Air team did was fantastic.” Said Luke. “James and the team were proactive, always on to it and took away any worries. They knew what was going on at all times and when challenges arose they were already dealing with them. All of the team were friendly, helpful and so great to work with. I can’t recommend them enough.”

Founded in 1972 by Managing Director, Jim Sweeny, Active Air Rentals has grown from humble beginnings as air conditioner installers and sheet metal manufacturers, to an all round national cooling, heating and power rental company.

Today we are a multi-faceted business with four branches, two distribution centers and employing over forty permanent staff across Australia.

Active Air Rentals has over 40 years experience installing temporary air conditioning into every conceivable location. From crane towers to coal mines, from war ships to entire inner city villages, from emergency civil defence camps to enormous events such as the Australian Open and thousands of offices and server rooms along the way.