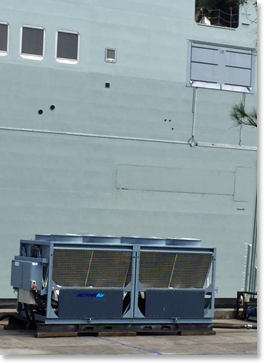 Earlier this month NUSHIP Adelaide, a $1.5 billion Landing Helicopter Dock, moored next to HMAS Canberra at Garden Island. The ships made headlines in March when residents and environmentalists alike complained of around-the-clock noise and diesel fume emissions.

Although the ships were turned off while docked they still required electricity 24/7 to run central air conditioning and machinery such as high-powered aircraft lifts. To do this they used generators, which caused the problems.

So this time, to minimise environmental impact and neighbour disharmony, the decision was made to install two wharf-side chillers using wharf-side mains power. This would: “Allow the ships to run off shore power alone at night, removing the previous requirement to use the ship’s diesel generators and thereby reduce noise and exhaust emissions, especially during the quiet hours,” a defence spokeswoman said.

To fix their noise and emission problems Defence engaged a specialised facility management company. After the facility management’s incumbent temporary chiller provider proved unreliable, they started a search for a company who could provide the technical expertise and equipment to deal with the ships’ very specific chiller requirements.

Brad Sweeny, Director, Active Air Rentals, explains. “Warship chiller systems run on 6 bar pressure. This is much higher than what’s used in a standard install for say a building. Also, all warships run on an international power standard; 60 hertz with 440 volt supply. Again this is not the norm. Here in Australia standard power is 50 hertz with 415 volt supply. Whoever the facility management company chose had to have the capability and equipment to deal with these requirements.”

After completing a site visit and discussing the technical requirements with the facility management company and ship teams, the Active Air team put together a plan.

“Based on the technical and capacity requirements we specified two customised 750kW chillers along with reinforced pumps and hoses that would withstand the 6 bar pressure. We also used our in-house electricians to modify the chillers for the 60 hertz with 440 volt supply electricity.” Explains Brad.

The Active Air team had just 8 hours from the time the ships docked to when the chillers had to be commissioned and working.

“Given the short turn around time we planned everything before we got to site.” Notes Brad. “First, the chillers were craned into place on the wharf next to the ships. Then we ran our modified chiller hoses in through what are essentially ‘port holes’ and connected to each ship’s chilled water lines. While this was happening our electrical team connected the chillers to the mains power and ensured there weren’t any problems.”

As promised, the chillers were up and running within just 8 hours. An exceptional feat given the technical requirements of the job.

The chillers are working exactly as they should and there haven’t been any complaints from neighbours about noise or exhaust emissions.